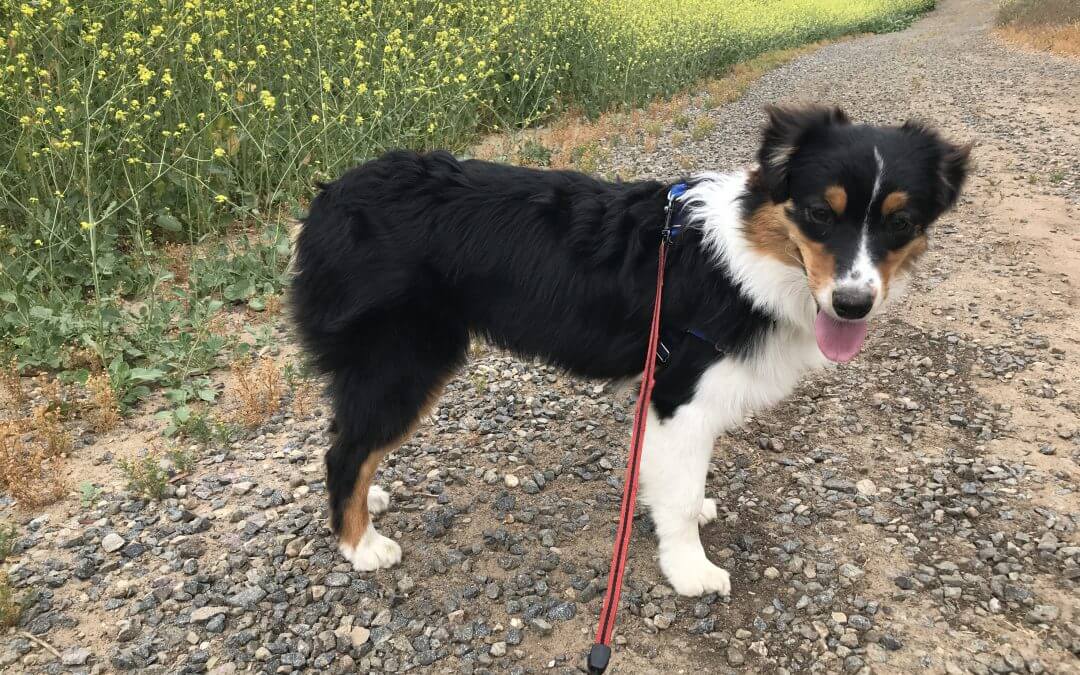 I decided to take both kids on a walk around Newport Back Bay today since it was such a beautiful day. I don’t normally walk them together because it’s just easier to walk them separately. Rowdy’s actually very good on a leash with the exception of a squirrel or lizard sighting, then I just can’t compete! But since neither one has ever been to the Back Bay I thought I’d give it a try.

Rumble, now 6 months old, but very much still a baby, likes to stop at every twig and pimple in the road. She darts from side to side, stops suddenly right in front of you, and manages to get all involved tangled. While I admire her Jeux de verve, it’s annoying to have to stop every few steps while she conducts a thorough investigation of her 12th empty snail shell. Not to mention the continual unravelling of leashes!

Rowdy on the other hand, investigates more discerningly. Being the mature gentleman of 3 years now, he’s sniffed his fair share of dirt clods and dead weeds. His main concern these days is reading and answering pee-mail.  He casually walks along trying to avoid Rumbles antics, but often falls victim to the leash tangle as she runs under him and pulls his rear legs out from under him. He’s patient, I’ll give him that for sure!

We (and by we, I mean Rumble) did see some great new things on our walk including a snake – not a dangerous one, a horse, horse poop, bikers, dogs, runners, a huge group of school kids on a nature walk, and lots of different surfaces. So, it ended up being a very good socialization experience for her, and Rowdy too.

So, what started out as a challenging walk ended up a pleasure after all, especially for the dogs who are now asleep at my feet as I write. I now know I need to work on my 2 dog leash handling skills, and Rumbles “leave it”, which apparently doesn’t count when it comes to horse poop!!