Is It Play or Something Else? 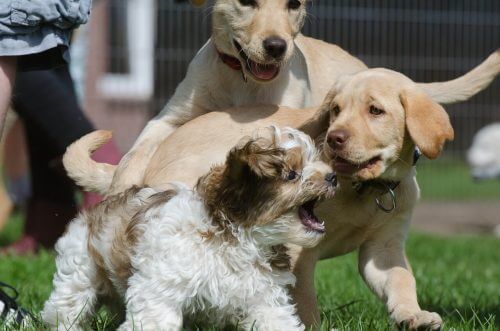 Safe, healthy play between dogs can provide exercise, fun and help build social skills. Puppies need play to learn proper dog – dog communication and how to get along with others. Rough or inappropriate play can cause more harm than good. “Bad” play can leave a dog with emotional or physical problems and, in some cases, lead to aggression.

Here’s what to look for when dogs play:

Normal play can include chasing, barking, growling, biting, pouncing and wrestling. While in some cases these behaviors may seem rough, the play is appropriate if both dogs are having fun. There should be no winners or losers.

Role reversal – when the chaser becomes the chasee, or the dogs switch places when wresting. No dog should continually remain on top of another dog or always be the one chasing.

Self-imposed play breaks – these should occur frequently during play. You’ll see 2 dogs playing, wrestling, chasing, then all the sudden stop. That pause might include a shake-off or a play bow, or just stopping and staring at each other. It may last a few seconds then play resumes.

Self-handicapping – occurs when one dog voluntarily puts itself in a vulnerable or disadvantaged position in order to give the play partner a competitive advantage. For instance, a larger dog may lie down to play with a smaller dog.

During normal play both dog should be willing to continue playing. If one dog walks away from play the other dog should not relentlessly pursue it.  Nor should a dog be continuously barking in another dog face to solicit play.

Here are a few examples of inappropriate play:

Rude or inappropriate behaviors should always be interrupted. Separate the dogs for a few minutes to allow them to calm down.